Correlation helps to identify the pattern of change between two variables. It has two properties – strength and direction. It is a common statistics concept which can be easily represented in Excel using a scatter chart and a trend line.

What is Correlation Chart?

If variable 1 increases, variable 2 will also increase – and vice versa.

If variable 1 increases, variable 2 will also decrease – and vice versa.

Step 2: Select the column for X-axis and Y-axis. 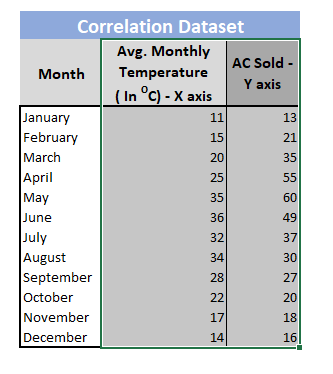 Step 6: Select the most suitable trendline. Check the following boxes as shown below.

Array1 is the first data range of values.

Array2 is the second data range of values.

Value in Example Above: